Launch day arrives for Pure Majek. There is a Launch Movie at the base of this page, but here are the proceedings in more detail.

The move all started on Friday 12th December 2008 when we received a phone-call saying “we will be there in two hours to get the boat out, hope you don’t mind”.

This call was two days early and threw the planned next two days duties into total chaos.

The deck-tread was not even dry, the external lights were not connected, the carpet wasn't even down, the saloon table was yet to be installed…panic had set in.

The move of the 6m beam vessel out the 5.2m driveway was very impressive. The driver told us to stay clear and he would have it out in no time.

It took him 35 minutes and it was then that the impact of what was occurring hit home. This huge monstrosity of blood, sweat and a few tears had hatched. It was huge.

Our yacht is loaded

That Friday evening was a late one, getting touch-up painting done, all carpets down and table erected.

The yacht shone in the sun, with the rooms now well lit through the windows. The lack of light had been a concern to us under the covers, but all was well (as the Designer had told us).

The family then had all the mattresses and blankets, food and odd bits finding new homes.

The water tanks were again filled and tested – with no leaks this time.

We spent a few hours connecting the gas detector before the gas man came in and fired up all gas connections, finally giving us the tick of approval for gas compliance. 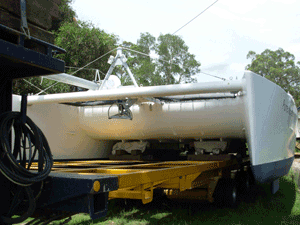 Sunday 14th December was moving day. The last of the fitout was completed and the yacht given the ‘Gerni’ once over. It now shone… a sunglasses shine. At 23:00 on the dot that night, the drivers arrived. A team of 6 all went around like bees around a honey-pot, carefully securing the load.

This brawny bunch really did take care of loading and securing and have to admit that once unloaded, it was all in one piece with no scratches.

At 12:30am (now Monday 15th December) we started north on the Bruce Highway, two police cars, two escorts and two vehicles. The three lanes drew down to two due to roadworks and the northbound traffic started to build behind us.

Then the roadwork's started, where there was only one lane and the traffic now banked back about 1km. They had to lift the yacht 1.5m above the road surface to clear the guard rails and temporary concrete barriers, that was impressive. We finally exited the highway via the highway 'on-ramp' removing and replacing road signs that were infringing this narrow road. 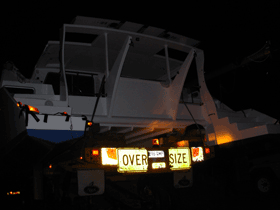 At 1:30am we arrived and Monty's Marina were it took the team 10 minutes to unload.

It was now that I realised that I had not brought the payment for the services as agreed. After driving back to Brisbane (some 30-minutes away) and finding an ATM, the driver was paid and we got to bed at 04:00am.

The alarm went off at 06:00am and it was up the highway again (via McDonalds drive through) to Monty's. The mast rigger arrived at 07:00am as agreed with the crane arriving at 09:30 to stand the mast. By 14:00, the mast was up and it was back home for a real feed and some sleep. 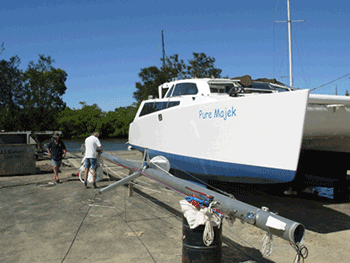 Tuesday 16th December, its D-day…will it float, will the waterline be correct, did we build too much weight into the yacht, have we done this, have we done that…the mind was in a real mess.

We quickly lightly sanded the anti foul and at 12:34 it was floating. Once the vapour locks were removed from the fuel lines, the brand new outboard motors purred into action. The champagne was spilt over the 'A-frame' and we were on our way down the Caboolture river.

It was a high tide at the launch and we wanted this to clear the sandbanks in the lower reaches of the Caboolture river. Once into Morton Bay, the swell was choppy around 1/2 - 1meter.

She just pushed on at 7.6-knots and the ride comfortable at the helm. The kids enjoyed the lookout from the nets, occasionally getting a splash. We followed the markers into Newport Marina where we settled for the next few days. This will be her home for the next twelve months.

That evening, the poor thing was crammed with people. 31 people paid a visit that evening and a further 14 the next day. I am happy to say that not a drop of red wine was spilt.

This brings this build phase of this website to a close. We have started another website (if you haven't already worked out from all the hints), called DIY-CATAMARAN.

Please save this link and give us your feedback. Here, we continue with the trials and tribulations as we learn to navigate, sail and tred-water with Pure Majek.

We acknowledge and thank:

> Peter and Anne Snell (Easy Catamarans Designer) - worth every cent,

> To those who inspire and inspired us through their support of this website,

> Our new friends on DIY-Yachts Forum.