'If you can smell the two-pack paint when spraypainting, it's already too late'

Spraying the catamaran's topcoat was very satisfying. These photos don't quite give the painting justice, as it comes up much better than what we show here. 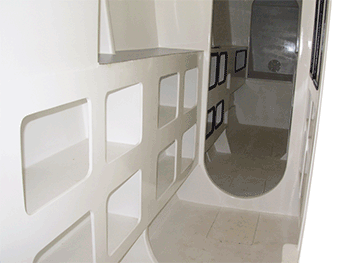 Wanting to use the gravity-feed spray gun presented some more challenges. As opposed to pressure pot spraying, gravity fed requires topups of the spray-gun after each litre is used and cannot be used upside down, so some thought needs to go into how the underside painting is going to be completed.

We used the Star S106 spraygun with a smaller nozzle (1.5mm - 2mm) to get the finer finishing coat. This did require some testing which was done on the internal surfaces. We logged the thinning quantities on the whiteboard when we got the finish we looked for. 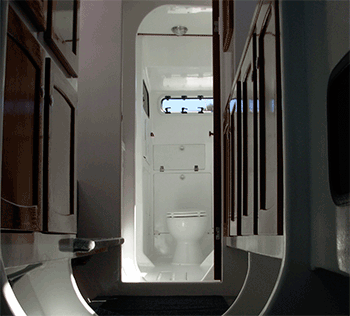 All that was needed now was the temperature, humidity and getting the ventilation right so that overspray did not resettle on the newly painted surface. The extra time spent in prior preparation each spray day, paid handsomely.

Back to 'discount trade tools' people, we were told that it would be cheaper to buy a whole new unit than the three bits required to change the current gun to the smaller nozzle.

There are a few tricks here to with respiration (refer our warnings below), thinning of the topcoat, temperature and coat thickness which we diarised in the Catamaran Building Books

Using a clean pair of disposable overalls (sometimes called coveralls) and butyl-rubber gloves are an absolute must. We went further and used a barrier cream on the face, wrists/hands and ankles (ie areas where if anything could be exposed, it had barrier cream coverage).

During the external undercoat paint stage, the decision to include plinths definitely did add to the increased build time as this forced us to start laying out the positions of electronics (depth, speed, wind, autopilot and multifunction unit), winches, blocks and tracks.

The main issue being that we had not even decided what brand instruments we were going to have. 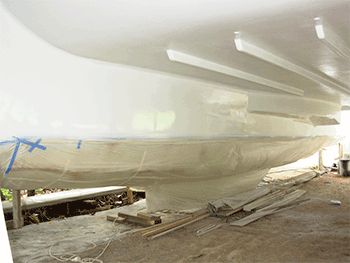 The last sand prior to the topcoat was done by hand with 240grit paper. The deck was marked with pencil lines providing a 50 – 80mm border around the plinths, hatches and lockers and topcoat painting was soon underway.

Overspray here was a major issue, making early starts a must while winds were down. As soon as the temperature had reached our preplanned value, the paints were mixed and multiple very thin layers applied as opposed to one or two thicker layers. 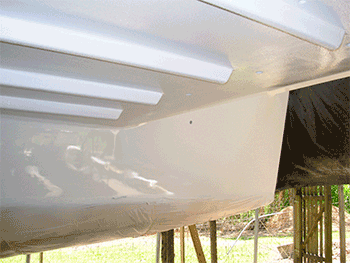 The other marked areas would be later filled with Tredgrip, a water based paint with rubber chlorinated granules. Caution with the choice of tape here was critical as this provided a very smooth edge with an unnoticeable join. There are tapes too that have 14-day periods but DO leave a residue that is very difficult to remove.

What a job, but a great two-pack finish that is a little hard to show here. Some of the 'fitout' photos prior to launch does this a little more justice. Bottle of red went down very well this night. 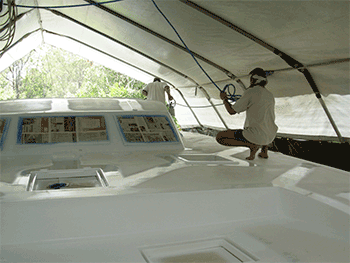 'Don't spray with humidity over 85% as the paint does not gloss. You never do enough wiping down prior to painting. Acetone really helps here and you will need a lot'.

The unfortunate thing about most two-pack paints is that most harbour isocyanates. Without repeating information from the Internet, Isocynates are the worst of the worst for the respiratory system and apart from being a major cause for industrial asthma, there is much written about its carcinogenic links (ie cancer causing qualities).

The myth that a normal respirator is suitable for two-pack painting is just that, a myth. Air-fed respiratory protective equipment should be used at all times. These pressure airline respirators provide a slight positive pressure whether the wearer is inhaling or exhaling. This constant positive pressure ensures that no vapours from the paint spray are inhaled. What should also be remembered too is that vapours do not have to be 'seen' (or visible) to be present.

If you can smell the paint when spray painting two-pack paint, it's already too late.

While many carcinogens are found around every house it should be no reason to expose oneself further to this nasty stuff. Many household chemicals and vehicle products are indirect culprits in some form.

Two-pack is no exception, it can cause nervous system problems, asthma, cancer and exposure reactions (like rashes and itching).

Some States also carry regulation on use of two-pack paints, it may pay to do a little research.

Listed are two good links that should give an all-round understanding.